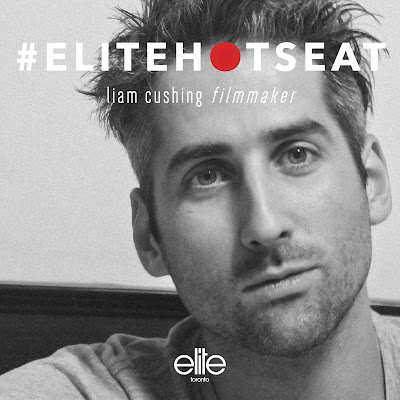 How did you get drawn into filmmaking?
-- I’d always loved film growing up but never considered it as a career path. In my teens I pursued photography as a hobby, as it seemed a natural compliment to my love of film, then in university I studied Cinema Studies but still didn’t consider it a professional option. Things started to change during the period that I was working as an assistant in London after working for Mario Testino. It was at that time that video cameras started to become more accessible. I found my love for film taking over from my photography work and I was gravitating more to film work, eventually getting hired more and more for directing.

Why do you think film as a medium works well to compliment fashion?
-- I think because fashion has always been about visual storytelling at its core, and that’s exactly what film does. Film allows fashion to go further, to expand on visual stories and themes that print is limited by. That being said I still love photography and I am shooting stills more than ever.

Can you describe your style to us?
-- I think of my work as having an overall dreamlike quality to it. Falling between the abstract/ethereal world of the mind and the sheer beauty of the physical world. Imagery can exist on a level beyond the confines of the superficial and into something more human and emotive. I see my work almost feeling like a memory, where the emotions feel real but the visuals are otherworldly.

You’ve assisted high profile photographers, such as Mario Testino, in the past. How did that come about?
-- I was looking for an internship in Toronto but opportunities were limited. So I decided to go big and get in touch with photo agencies who represented my favourite photographers, one being Art Partner. I ended up getting the internship and assisting a lot of photographers on Art Partner’s roster, and working a lot with Mario Testino’s Head of Production and agent, who then introduced me to Mario.

Why do you think there has been an increased interest in fashion film in the last decade?
-- I think it’s a natural evolution, and the inherent ability of film to tell a story makes it so appealing to fashion. I think that people are gradually becoming more attracted to moving images in fashion, as film is becoming more accessible and naturally has the ability to elicit more of a connection than other visual mediums.

How do you find or generate ideas for your films or is it a different process for every project?
-- For commercial work a project usually starts with a brief and then I work closely with the campaign creative director and client to bring the concept to life. For personal projects I often have a of couple ideas that I’m building over time. Waiting until I have the right talent and team together before I start to film.

Fashion designers are notoriously picky when it comes to creative output. When you come up with the idea for a film, do you ever have any conflict with the designer?
-- It depends on how much creative confidence the client or agency has in me. For the most part it’s been smooth interactions, and for some more difficult ones I just try to roll with it and focus on making the best product I can.

Can you tell us about a current project you’re working on?
-- I have a short film project that’s been a long time in the works, and working on a fashion film with Ezra Petronio.

Are there any other fashion houses you’d like to work with?
-- I’d love to work with Gucci. The work they’re putting out with Glen Luchford is amazing. Off the top of my head Isabel Marant, Acne, Missoni, Bottega Veneta, Missoni, Miu Miu, and Chloe.

What advice do you have for aspiring filmmakers and photographers?
-- Be true to your own vision, really listen and pay attention to creatives who you respect, and be prepared for a lot of rejection (and I mean a lot!) Other than that it’s a breeze.